Since 1932, Tooher-Ferraris Insurance Group has tailored insurance and risk management programs to meet the unique needs of each family, business and individual we insure.

Our dynamic team is made up of career insurance professionals and industry leaders dedicated to understanding the changing marketplace. Our collaborative approach utilizes our collective years of experience to better serve our customer.

The insurance companies we represent are among the strongest financial institutions in the world. Equally important is their long history of equitable claims payment delivered with exemplary service. 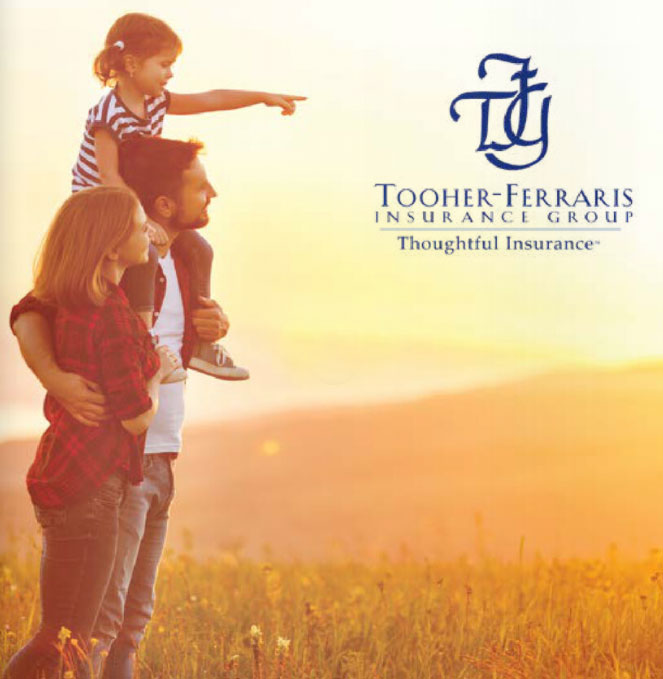 Your lifestyle is one that deserves to be protected.

At Tooher-Ferraris Insurance Group we deliver an integrated insurance and risk management program that protects the assets of each individual, family, and business we insure.

Risk Synergy is a synchronized collaboration of:

By coordinating underwriting, loss control, audit, claims, our team, and your objectives, we can deliver a superior and sustainable plan.

From compliance to communication, Tooher-Ferraris will deliver a full spectrum of solutions for your personal and business needs.

As a Trusted Choice Independent Insurance Agency we offer multiple insurance carrier options, knowledge and experience to help identify your strategic objectives with the goal of delivering innovative insurance and risk management solutions.

Showcase the highest ethical standards internally and externally during each day and throughout each interaction.

Advocate on behalf of the client and educate them throughout the process.

Collaborate collectively for the benefit of the business and customers.

Give back. Donate time and engage with those throughout our community that are in need.

Learn, grow, and be ahead of the curve. Navigate our customers through the changes in the marketplace.

Thoughtful insurance, you can trust.

Your lifestyle is one that deserves to be protected. Tooher-Ferraris Insurance Group’s proprietary methodology, Risk Synergy®, produces a customized insurance and risk management program for each individual, family, and business that we insure. Our friendly and knowledgeable team advocates, educates, and delivers high-touch service to our customers with honesty, integrity, and dependability.

Tooher-Ferraris Insurance Group is actively involved in giving back and proud to support local charities that work to enrich the lives of others. Each year we are committed to donating a portion of our profits to organizations that directly impact our community.

Here are a few of the organizations we have donated to over the years:

1928 – Joseph J. Tooher Sr., former acting Postmaster of this community and a former Chairman of the Democratic City Committee along with his wife, the former Mary Louise Brennan, formed the Brennan-Tooher Insurance Agency out of their home on Hillside Avenue in Stamford, CT. Mr. Tooher served as a State Senator from 1942 to 1944.

1932 – The Agency was incorporated in July of 1932. With only a handful of insurance carrier appointments, the Agency’s focus was strictly Personal Lines including home and auto lines of business for families within Stamford, CT.

1970 – Peter P. Ferraris, Jr. joined the agency in early the summer while working as a 6th-grade school teacher at the Stark School in Stamford, CT. He loved to teach and educate his students on not only the answer but the “bigger picture” and life. During the summers he split time between working as a carpenter and within the agency. After several summers, he realized he had a passion for helping people, enjoyed insurance and providing guidance throughout the insurance sales process.

1975 – It was shortly after he became a full-time agent eventually taking over the business in the mid-’70s. Although the Tooher family was no longer involved in the business the name was kept, becoming Tooher-Ferraris Insurance Group. At the time Joseph J. Tooher had recently been the Postmaster General of Stamford, CT duly elected in July of 1962. Peter immediately opened up a Commercial Department for small businesses seeing an opportunity in an underserved market.

1980 – In the early ’80s, Peter Ferraris uncovered an opportunity with an exclusive market writing HOA’s, Condo Associations, and Co-ops, called Community Association Underwriters (CAU).  CAU was one of the first products designed specifically tailored to Condo Associations. Tooher-Ferraris was one of two exclusive agencies in CT to offer these policies. It was a time in Connecticut where there was an explosive growth of residential development. CAU afforded best-in-class service, a better policy form, and rates that were substantially below the rest of the insurance carriers attempting to write this business. Due to the success of this program, our Condo Department was formed focusing exclusively on Homeowner’s Associations.

1998 – Carolyn Ferraris joins the agency as Reception and Office Manager, responsible for the “first hello” to the backbone support of the Agency Account Executives. Recently expanding her role further by acting as Quality Manager in our Homeowner’s Association Department.

2001 – Eric Ferraris joined Tooher-Ferraris Insurance Group after working at Priceline.com for 3 years. Working in various capacities within Priceline, Eric gained a much better understanding of software, network infrastructure, and how technology could shape the customer experience. Eric brought his technology focus to the Agency and has kept with his father’s tradition of educating while delivering risk management and insurance solutions.

February 2016 – Frank Pingelski was hired to head up our Homeowner’s Association Division, becoming Vice President. As a key part of our Agency, Frank manages the relationships with Property Managers, Association Boards, and our Specialty Insurance carrier partners.

Present Day – One of the largest independent family-owned and operated insurance agencies in Connecticut with licenses in 40 states. What makes our Agency unique is the 31 career insurance professionals, their focus on customer service, insurance expertise, and delivering unique solutions for our clients through our long-standing insurance carrier partnerships. We serve over 2500 clients with four distinct specialty departments including Homeowner Associations, High Net Worth Personal Lines, Specialty Commercial Lines, and Group Benefits.